In 2011, I anticipated a reckoning for job losses from global trade deals. It hit like a brick with Donald Trump, but won’t end there. Here are my thoughts on the future implications of Senator Elizabeth Warren’s plan to demand that poor countries meet labor and environmental standards to trade with the US.

It’s true that Clinton-era free trade agreements caused a multi-decade job bleed from the US, especially in manufacturing. Free trade usually benefits lower cost providers. Great for emerging nations, not so much for us air-conditioned first-worlders.

There are things we could have done to phase in free trade deals and limit the downsides, like boost investment and re-train workers for other industries, as Germany does. But hindsight is 20/20.

While ALL consumers benefit from lower prices from free trade and much smaller groups of workers benefit from protectionism, it’s the job of national leaders to balance the two. That did not happen here. The digital boom abandoned the analog workers of exported industries.

All leaders have a fiduciary duty to their citizens first. But that can be interpreted differently, especially depending on how short- or long-term their perspective. Sometimes, election cycles incentivize bad short-term decisions, like when politicians sell off important public assets to close a budget hole or buy off unions with unaffordable public pensions.

No point in re-litigating the past. We need to deal with today’s reality.

Senator Warren proposes demanding a higher bar for trading with the US, which will likely make it difficult for some countries to meet. If they try, it will raise their costs, making US production more competitive. If they don’t, we’ll deal with those who can or do it ourselves.  Either way, this will drive up prices in the short-term and incentivize faster automation in the long-term (a bit like raising minimum wage does). This also favors larger producers that can afford automation technology.

Automation would leapfrog foreign labor, stunting economic development by keeping more industries in the US. Some poor economies will miss their chance to get richer through labor. 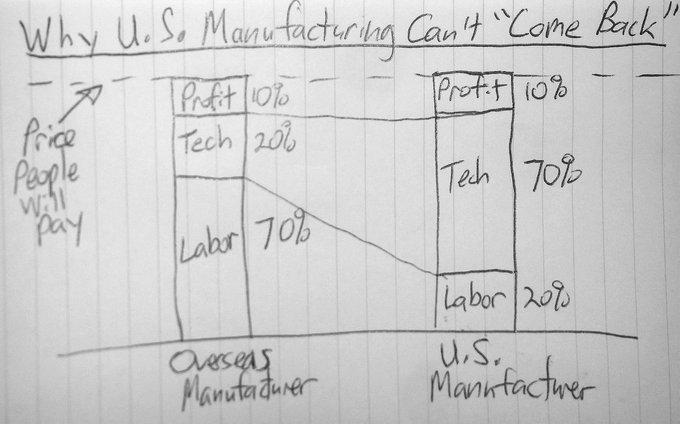 The end result will be a faster, job-free domestication of global industries.

When manufacturing “comes back” to the US, it will not employ any of the forgotten workers who currently favor it.

For the prices people are willing to pay, China uses lots of cheap labor, but we’d need to automate, creating only create a fraction of the jobs. And NOT for lower skilled laborers with high school degrees, who are cheering this on, but for high-end engineers and specialists.

The biggest implication of this trajectory is we’re speeding towards global redistribution of goods and profits.

As existing and new industries demand fewer workers with higher-end skills, prices will drop while inequality increases. (I laid out the full argument in ‘Inequality We Trust‘.)

That means our conversation will quickly shift from trade to re-training, sustaining, and motivating larger populations. One possible solution, being popularized by presidential candidate Andrew Yang, is the Freedom Dividend or Universal Basic Income (UBI). But it’s flawed and far from comprehensive.

UBI – and all this trade talk – won’t address what’s looming. We’re a few decades from confronting the challenge of preserving personal freedoms, innovation/entrepreneurship, and essential services in the face of aging, radical automation, under-employment and global inequality. The longer we wait, the likelier we’ll leave this in the hands of expanding governments and corporations, not individuals and communities.  We might not love the results.

In the meantime, I support a different approach to helping emerging nations develop. Compared to Senator Warren, my plan uses trade as one of many incentives, not as a contingency. Read it here.

Patreon members get a complimentary digital or signed hardcopy of Econovation.

Why our FriendSHIP Sailed

BasecampFIRE: How ‘Woke’ Broke An Iconic Tech Firm, ARE YOU NEXT? | The McFuture Podcast